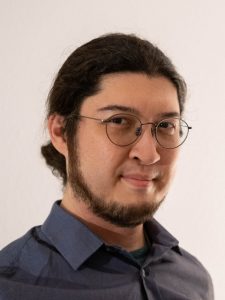 New CNC faculty Edgar Walker, PhD, assumed his role as Assistant Professor in the Department of Physiology and Biophysics on January 3rd. Since completing his graduate work in the lab of Dr. Andreas Tolias at Baylor College of Medicine in Houston, Walker has been a postdoctoral fellow in Dr. Fabian Sinz’s lab at the University of Tüebingen in Germany.

Walker has been in computational neuroscience since graduate school, working on both experiments and theory. “My interest has always been understanding the representation of sensory information…underlying decision making,” Walker says. He studies populations of sensory neurons, particularly in the primary visual cortex, using electrophysiology and 2-photon imaging to determine “how [the neurons] represent visual information…not just what they saw, but the belief about the state of what they just observed.”

Humans and our primate relatives rely heavily on vision to make sense of the world around us, and frequently use what we see in our environments to make decisions about appropriate actions. However, our vision and other senses don’t represent reality with 100% accuracy. “It would be nice if [when] you observe something, you [could] always be sure what exactly you observed,” Walker says, “but most of the time it is fairly ambiguous.” The level of ambiguity can influence decision making about appropriate responses to the world. If you’re meeting a friend and see a person approaching wearing a jacket that looks like your friend’s jacket and with hair that looks like your friend’s hair, you might decide to wave at them. However, if they are all the way across the room and there are many people between you and them, you might be less certain of what you’re seeing, and may decide to walk towards the person to see if it is, indeed, your friend. The neurons in your visual cortex fire in ways that not only communicate what you are seeing (in both cases, a familiar jacket and hair), but also your level of confidence in what you’re seeing (which will be much lower in the second scenario). Walker is interested in how visual cortex neurons encode this uncertainty, as well as how it is taken into account when making subsequent decisions. There are many ideas about how this may occur. “The theory has actually been around for a couple of decades,” Walker says, “but there [have] been very few studies that [have] been able to link it directly to experimental results, or experimental results that directly test for these [theories].”

Walker’s research at UW will strive to make this link between experiment and theory, working closely with experimental collaborators to collect neural data and using principles of machine learning to supply the computational power needed for such a task. “I actually went through the whole slew of proper monkey physiology training,” Walker says, including learning how to train primates to do behavioral experiments (or, as he says, “learn[ing] to be trained by the monkeys”), a background that he thinks will be helpful in working with these collaborators. “I know the limitations of the animal experiments, but also new directions in which it might be able to be pushed, so I’m really looking for that kind of…very close experimental collaboration.”

In addition to his work on sensory encoding and uncertainty representation, Walker expects his lab to continue some of his recent work developing models that can predict neural responses to different visual stimuli. “I’m hoping that I can further these kind of models and then do them in tandem with different theories so that, hopefully, theory can inform these models, and in turn the model…[can] suggest which theory is more consistent,” he says.

Walker was drawn to UW partially because of the CNC. ”There are obviously many different places where there are notable computational neuroscientists,” he says, “but in terms of having an actual center that focuses on computational neuroscience and is a thing that they’re actually trying…develop further, [the CNC] has been a huge attraction.” He is also excited by the diversity of academic tracks represented at UW and within the CNC. “I have quite a bit of diversity in my background myself,” he says, “I have come from an engineering background [and have] done medical studies as well.” He looks forward to working with a diverse set of students who can approach his research questions in unique ways.

Another draw to Seattle was the combination of mountains and water, which Walker, originally from Japan, misses. In Japan, Walker says, “wherever you go, you can’t really escape from oceans or mountains. I really miss that kind of opportunity of being able to go somewhere in a bit and you see water…, and you go the other direction and you have mountains and great trails and hiking places.” He is looking forward to exploring both oceans and mountains with his two dogs as it gets warmer. In the meantime, he and the dogs have been enjoying regular walks around Greenlake.

Walker can be reached at eywalker@uw.edu.