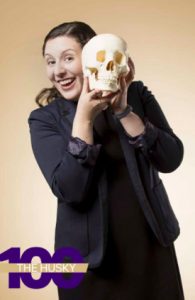 Joint UWIN-Computational Neuroscience fellow Kaitlyn Casimo has been named one of the 2018 Husky 100. This award recognizes 100 undergraduate and graduate students from across Bothell, Seattle, and Tacoma campuses “who are making the most of their time at UW”. Kaitlyn is a graduate student in the Ojemann lab, studying the electrophysiology of human resting state and task based brain connectivity, working with patients undergoing epilepsy surgery.

Kaitlyn has been active in scientific outreach and communication programs during her time at UW, including working as a Science Communication Fellow at the Pacific Science Center, and serving as the student coordinator for UW Brain Awareness Week and the student outreach coordinator for the Center for Sensorimotor Neural Engineering. The Husky 100 award recognizes Kaitlyn’s efforts to make neuroscience accessible . About the award, Kaitlyn says “Besides developing programs in interactive, informal science learning to make science fun for kids and adults, I’m improving the way we tell stories about science on the stage and page. When I’m not doing research on patterns of connectivity in the human brain, I’m working to bring science to new audiences in innovative and accessible ways and to teach other scientists to do the same.”